Over Korean’s Memorial Day weekend I traveled to the southern province of Jeollanam-do, South Korea.  Since the holiday fell on a Friday this year, I was gifted with a rare three-day weekend.  I traveled through a tour company with about 50 other foreigners.  With the amount of things packed into the trip, three days felt like a week! 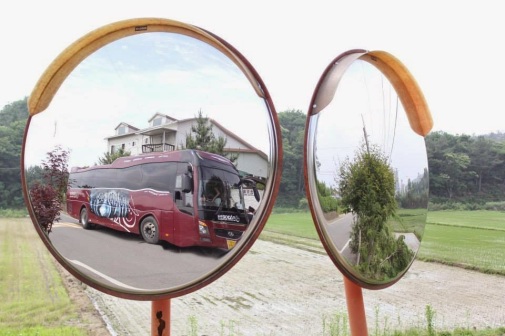 We left Seoul by private bus on Thursday night and arrived in the coastal city of Yeosu around 4am on Friday.  It was completely dark as we departed the bus and were given breakfast muffins and directions to the nearby Hyanglim Temple for sunrise viewing.  The temple is situated on a cliff overlooking the ocean.  There is nothing like a challenging climb up a mountain first thing in the morning.  My internal clock was a little off due to lack of sleep, but I think it took less than 45 minutes to reach the temple.  By the time we got there, day was just starting to break.

From the temple, there was the option to hike a bit further to the mountain’s peak.  It was about 20 minutes of some very steep climbing, but it was so worth it!  The view was incredible.  The sea was so calm, and the colors of an ocean sunrise (from the top of a mountain) created quite the living masterpiece.

After the temple and a quick nap in the grass, we headed to the small island of Odongdo (named for the Odong tree leaf it resembles).  When I say small, I mean we took our time walking around the whole thing in less than two hours.  There are many designated areas around the island with some catchy names.  The first to catch our eye was “Dragon Cave.”  I was feeling brave enough to shimmy down the rock into the water and walk a little ways into the cave before it got too dark and filled with trash and lots of rusted metal (no idea).

No dragons were spotted, but on the way back from the cave I encountered my first jellyfish.  Since I grew up far away from oceans in small-town Indiana, I naturally panicked a bit.  Even though everyone was pointing to it from above, I couldn’t see it from where I was in the water which made the whole experience all the more terrifying.  At one point I heard someone say there were two, so I thought a whole school of enormous jellyfish was heading my way.  After my new friends blindly directed me to safety and I finally laid eyes on the jellyfish for the first time, I was a little embarrassed at the amount of screams that left my mouth.  The thing was tiny and its lack of tentacles probably meant it couldn’t have stung me anyway.  Still, quite the ocean adventure for an Indiana girl.

Naganeupseong (Na-gun-up-song) Folk Village where we made ourselves at home in authentic traditional-style straw-roof homes. A Korean bed-and-breakfast, if you will.  The homes are “ondol” style, meaning we sleep on mats on the heated floor.  The village is surrounded by an ancient fortress wall so it really felt like we had traveled back in time a bit.  The best part was we arrived just as the place was shutting down to tourists so it seemed we had the whole village to ourselves for the night.

We had dinner in a local restaurant just outside the village walls where we were served BBQ duck.  It was traditional Korean BBQ style so we sat on cushions on the floor with the grill in the center of our table and were served endless amounts of raw duck and veggies with full control of the cooking.  It was delicious.  We ate more than enough. 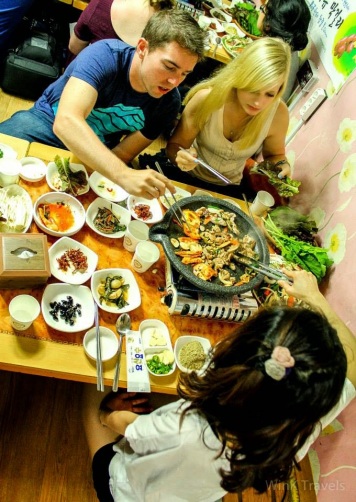 After dinner the majority of the group met up on the fortress wall for drinks.  It felt amazing to make new friends atop an ancient castle wall. I can only imagine a similar scene hundreds of years ago of Naganeupseong villagers sitting in the same spot, drinking makgolei, and watching the stars.  It’s something we don’t often think about, but history has a pattern of repeating itself, even the little things. 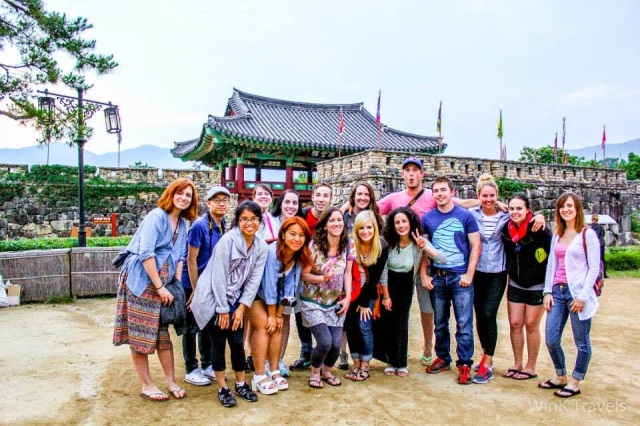 The next morning, we headed to Boseong Green Tea Fields, a nationally famous green tea plantation, and a high item on my Korean bucket list.  The land is very green and picturesque.  We did some light hiking and snacked on green tea ice cream.  If you ever encounter green tea ice cream, get the double scoops!  The stuff is delicious!

Speaking of delicious, I tasted some of the best green tea I’ve ever had at a smaller plantation.  We were given the wonderful opportunity to pick our own green tea leaves and participate in a green tea-making process.  Unfortunately, said “best green tea” was by no means of my hand, but was the work of professionals.  Still, the plantation experience was lovely!

Before checking into the hostel for the night, we made it to one more bucket list item: the Damyang Bamboo Forest.  It’s incredibly popular among Koreans and tourists alike and was extremely busy when we visited, but it was really fun to see so much of a beautiful foreign plant.

For our overnight in Jeonju, a big group of us headed to a local restaurant for dalk galbi (spicy chicken stir fry).  There was an option to add cheese and ramen, which of course we did.  There is no better way to bond with strangers than an adventure followed by a scrumptious meal.  The beer and soju (Korean liquor) was flowing and being passed around tables, which was a clear indication the night wouldn’t be ending anytime soon.  The majority of us ended up at a tiny bar playing familiar nostalgic tunes and we danced until the wee hours of the morning.

On our way north back to Seoul, we stopped off at Maisan Park for a quick hike through the valley.  The two mountains composing the valley are known simply as the “donkey’s ears” because of their physical resemblance.  However, there is a legend the peaks were formed by two gods who were trapped during their ascension to the heavens because they were seen by a local villager. 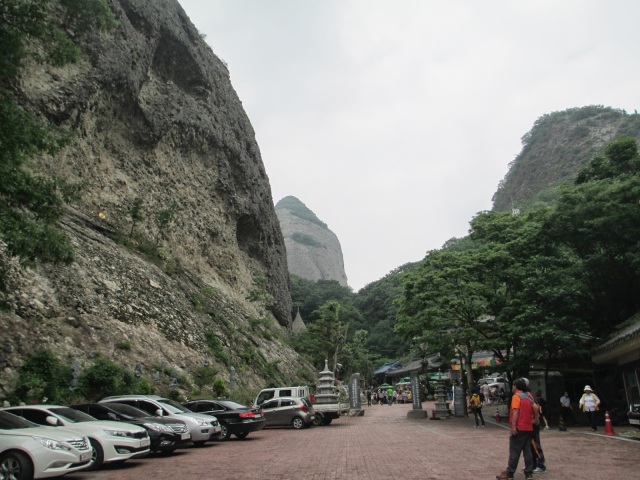 A lot of mystery surrounds Maisan Park.  Surrounding the valley’s temple year round are nearly 100 stone “pagodas” that were stacked by a single man in the 1950s and still withstand any season’s weather conditions.  Unimpressed? Listen to this: in the wintertime, water placed in a bowl freezes upwards, reaching for the sky!  That in itself makes me consider a trip back to Maisan in wintertime to witness this phenomenon for myself.  How bizarre!

Overall, this trip was fantastic.  I met some wonderful people, made some great new friends, and explored a small part of this beautiful country I currently call home.  Thanks for the ongoing adventures, Korea! 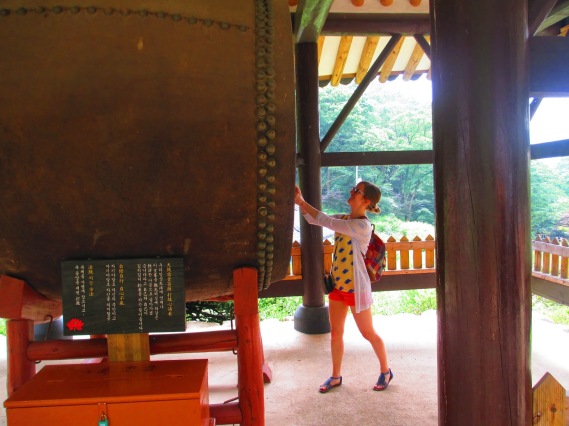