Although Korea is a small country and you can find the same cuisine across the nation, each province or city prides itself on one specific dish.  In the case of Suwon, South Korea its famous meal is sogalbi (beef ribs).  I traveled 30 minutes outside of Seoul with Korean friend, Mrs. Hoa, to meet her former professor, Mr. Cho, now a dear friend, in Suwon, who wasted no time in taking us to the most famous restaurant in the city.

Suwon’s sogalbi stands out from the rest of the country’s because of its sweet and savory marinade.  Approaching the restaurant I could see giant pots of fermenting kimchi (a Korean staple made of spicy cabbage), amidst several interesting sculptures.  Upon walking inside, soybean meal was drying in preparation of spicy soybean stew.

As usual in Korean restaurants, our table was already donned with numerous pancheon (side dishes).  Our grill was filled with burning wood and a pile of raw seasoned cow was presented.  While our meat BBQ’d we sampled all the sides, but I was saving room for the main event.

If you are familiar with steak, you should know that simple is always better.  The meat should be able to stand alone.  The ribs were flash grilled and among the most juicy and tender cuts I’ve ever had.  The Suwon marinade provided a wonderful presence, but never overshadowed the meat itself.  No wonder this dish is the city’s pride and joy!

Since we planned to visit Hwaseong Palace after lunch, I was given a bit of information about King Jeongjo and his reign.  Of course, a royal tale must begin with a tragedy.  Jeongjo was preceded as king by his grandfather, not his father as you may have guessed.  Jeongjo’s father, Prince Sado, was killed by royal decree after failing to follow orders to commit suicide: a lose-lose situation.  If you know how a monarchy works, you might be putting together that orders are given by the king, who happened to be the prince’s father, so Prince Sado was sentenced to death by his own dad.  Still following?  There’s a bit of controversy as to the cause for Prince Sado’s execution (most claim the reason was Sado’s insanity), but the effect is pretty straightforward: the crowned prince was locked into a rice chest on a hot July day and starved until his death 11 days later.  Yikes!  It was at this point that our server came to ask if we would like to finish our meal with rice or noodles.  I practically yelled, “NOODLES!!!” and our ice cold naengmyeon (buckwheat noodles) were delivered immediately.

After lunch, we made our way to Suwon’s main attraction: Hwaseong Fortress.  The ancient structure was commissioned by King Jeongjo in the late 1700s in the hopes the capitol of Korea would be moved from Seoul to Suwon.  The almost four-mile wall took just over two years to complete and most of the workers were paid in rice. Had the workers been paid in Suwon beef ribs, maybe I’d be writing about an eight-mile wall in the new capital of Korea. 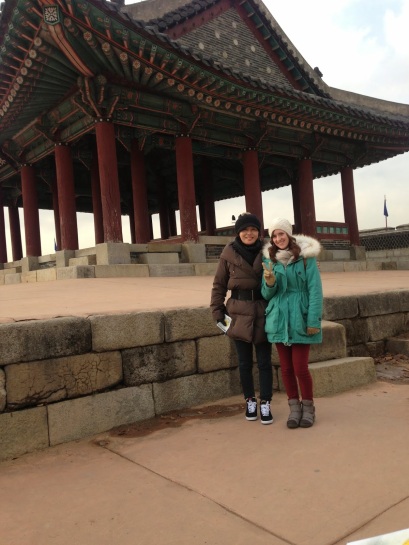 All jokes aside, Hwaseong Fortress is a beautiful and substantial work of architecture.  Designed by a renowned architect in his time, it is one of the first structures built in Korea with the use of pulleys and cranes. Doesn’t sound impressive now, but it was modern technology then and a huge deal.  One of my favorite parts about living in Korea is seeing the mixture of the distant past with modern day. It creates an interesting perspective being within the ancient walls while contemporary skyscrapers stand just beyond.

Despite the traffic and modern surroundings, I was still able to imagine the days of yore. All along the way were various cutouts from the wall for the appropriate weaponry.  See if you can guess which kinds of armory were used at each opening.

After strolling the length of the wall’s western section, and visualizing medieval defenses, it was time to put our real life skills to the test and try our hands at archery. We collected a bow, 10 arrows, and a few tips for form and technique and then it was time to attack.  Of my 10 arrows, I was able to make only three stick in the target board.  It looks so much easier and cooler in the movies.

We made our way over to the palace just in time for the performance displaying ancient fighting techniques.  The king appointed a special weaponry artist to develop new forms of defense specific to Suwon and Hwaseong Fortress.  Maybe that’s how they guarded the secret ingredient of Suwon sogalbi.

It was finally time to see what Hwaseong Fortress was protecting: the palace.  You haven’t forgotten the tragic rice chest story, have you?  Once inside the palace, it was hard not to remember Prince Sado’s gruesome demise.  Those rice boxes were everywhere!  It really added a spooky atmosphere.

Despite his father’s controversial murder, King Jeongjo assumed the throne with pride. He commissioned the fortress to honor his father’s memory and appointed his mother, Prince Sado’s widow, as queen dowager.  Even though King Jeongjo was married and succeeded by a son, his wife and son seemed to play a very small role in the king’s life.  The queen dowager, his mother, was more of a presence throughout our tour of the palace.  Below is a representation of a royal banquet the king held in honor of his mother where 12 appetizers, 70 main dishes, and 42 flower decorations were presented.  I think it’s safe to say that King Jeongjo was a total mama’s boy.

To round off an already amazing day, we decided to relax with a cappuccino and some honey bread, a popular Korean dessert, at a quaint cafe in downtown Suwon before heading back to Seoul.  Thick and chewy bread is warmed, drizzled in honey, sprinkled with cinnamon, and topped with whipped cream.  It was the best way to end our full day in Suwon.