With this being my first Christmas away from home, and in a country so far away, I’ve been feeling a surplus of Christmas spirit with very little outlet.  So I decided to bring an American Christmas to Korea.  I wanted to gift my Korean co-workers and friends with something “über” traditional to my home country.  I had no idea how ironic my use of the German word “über” would be…

My first thought: candy canes!  What is more iconic to the jolly holiday than those adorable peppermint sticks.  My goal was to find them aplenty and adorn them with googly eyes and pipe cleaners to resemble our red-nosed friend, Rudolph.  Don’t you remember making these as a kid?  Or receiving one every year from your kin? 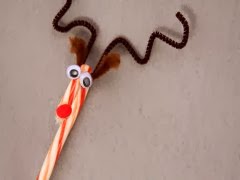 In Korea, candy canes are a rare commodity, even around Christmastime.  It was at this time that I learned exactly what Christmas means in Korea, according to a few local friends.

Christmas is a fairly new holiday to the country and pretty much everything they’ve adopted as Christmas culture comes from the USA.  Christmas cards are in English, American holiday classics are their song choices, and even the Korean translation of “Merry Christmas” is pronounced “Mae-ree-kuh-ri-se-mes-eh.”  Did you hear it?

Even more interesting, I learned there are three main collectives that celebrate Christmas in Korea.  There are Christians who celebrate Christmas by attending a church service on Christmas day.  There are parents who have young children with the blissful belief in Santa Claus.  And then there are unmarried couples, who this holiday seems to favor the most.  On Christmas day, Korea more resembles an American Valentine’s Day.  Couples go out for dinner and give each other doe eyes as they exchange chocolate and cute presents.  (Side note: in Korea, gifting a significant other shoes before marriage is believed to cause a quick end to the relationship.)

Let’s return to the candy canes: my hunt was short lived.  I found them at a bakery for $2 a cane and, let’s be honest, they’re not that good.  It was back to the drawing board.

After a much appreciated care package from the USA, I quickly remembered the three C’s of Christmas: cookies, candy, and cocktails!  However, let’s keep it clean and say hot chocolate.  And what is more American than melting marshmallows in your hot cocoa?  Like the candy canes, I was sending myself on a wild goose chase, but this time I prevailed!  These might be the most American ‘mallows I’ve ever seen. 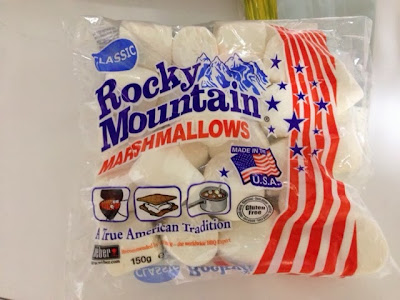 These cookies, on the other hand, are less American, but the gingerbread men and other Christmas impressions still did the trick. 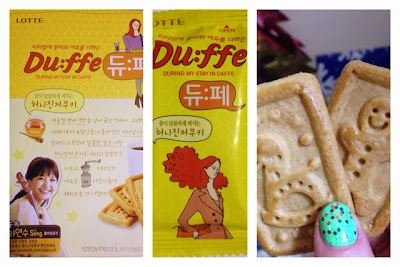 Now, do you remember my choice of wording with an “über” traditional gift and my insinuation to its irony?  Here’s where that comes in.  I had two C’s left on my wish list: hot cocoa and candy.  I went to a large “everything” store in Seoul called E-mart.  Wal-mart’s cousin?  Most likely.  First I found this classy “hot choco” imported from Belgium. 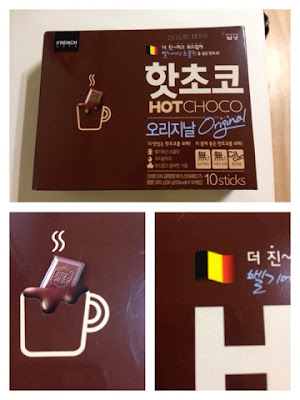 Then I snagged these jolly guys who I can only guess traveled from Germany. 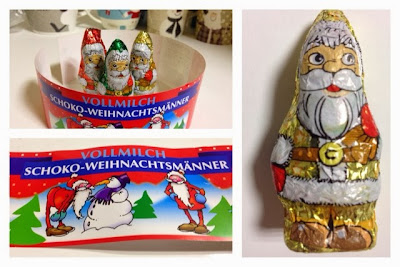 The best way to tie the whole ensemble together: a seasonal mug. 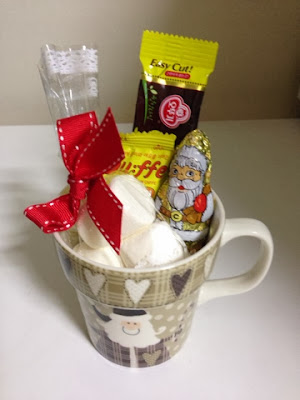 As I delivered these to the various desks and offices, I labeled them as a “traditional American Christmas gift.”  Little did they know (or maybe they totally knew) that only 20% of the gift could actually claim American citizenship.  But hey, it’s the thought that counts. 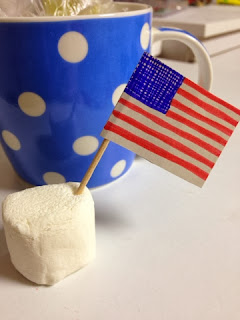