Yesterday marked the final day of the 12th annual Frozen Dead Guy Days festival in Nederland, CO. It’s a weekend-long celebration incorporating coffin races, snowy “beach” volleyball, an icy polar plunge, hearse parade, and frozen salmon tossing. I unfortunately got a late start to the icy festivities on Sunday due to some ice cold drinking festivities late Saturday night (oops!), but I did manage to catch a glimpse of some ice turkey bowling. Participants were sliding a giant frozen turkey down a snowy lane with hopes of achieving a 10-pin strike. It gave a whole new meaning to the bowling term “turkey” meaning three strikes in a row (which actually comes from the late 19th century when bowlers would be prized with a live turkey for the three-strike scoring feat).

So, why is it called Frozen Dead Guy Days? Get ready for some Bizarre History 101. The festival commemorates Grandpa Bredo, a Norwegian outdoorsman who would be 109 years old today had he not died of a heart condition in 1989. Because of Bredo’s family’s strong advocacy for cryonics, and their dream of starting an “ice preservation facility” (to put it nicely) of their own one day, Grandpa was packed in dry ice soon after his passing and shipped off to California. After four years of a liquid nitrogen bath, he was off to his current home: his grandson’s shed in the beautiful mountain town of Nederland, CO. Sadly, his family was deported back to Norway in the 90’s, but Grandpa Bredo is still well-preserved and cared for thanks to his personal caretaker “Iceman”, and the local and international support that comes from the memorial festival.
Even though yesterday was a chilly 30-degrees, the festival was a hotspot. Two packed tents set the backdrop with persistent live music. There were tons of sw 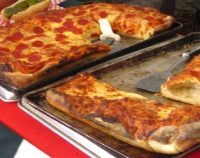 eater-clad dogs, flamboyant costumes, and dead-guy painted faces. I, of course, was anxious to scope out the festival food.  While I did find the densest of deep-dish pizzas, marshmallow-cereal treats the size of bricks, and hot sausages smothered in cheese and sauerkraut, the fodder wasn’t the star of the show.  I think that award goes to the local beer and live music.  Several Colorado brews were in attendance and the crowd alone was a testament to the musicians’ popularity.  The aura surrounding the ti 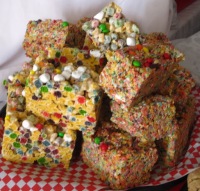 ny town was incredible.  Everyone seemed perfectly content to stand in the cold with each other.  It was almost ironic how visible our breath was when we were there to remember a frozen dead guy.  The festival is called the Frozen Dead Guy Days, but it’s really saying, “We’re still alive, so let’s celebrate!”

← "When do we eat?"
Drew’s Variation: Spicy Chorizo-Stuffed Pork Loin →